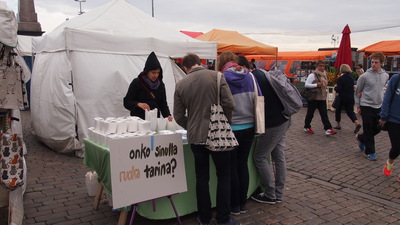 A project that began in 2012 exploring cross-cultural food experiences. 'Our Cuisine=Our Stories' in 2012 took the form of a cooking club during which nine women from diverse cultural and occupational backgrounds met weekly in East Helsinki during a two month period. A blog and a DIY publication were developed from the material collected during the meetings.

In 2013 OC=OS has taken the form of workshops and 'Taste Exchange' events. In March 2013 we presented our first Taste Exchange event as part of IRVi (a night of performances at Stoa Cultural Centre as part of the week against racism). During September and October 2013 we will present Taste Exchange events at Helsinki's open air market (Kauppartori), as part of Art Häme festival in Riihimäki and at Ptarmigan space in Tallinn.

“Sari is an artist whose projects explore a relationship between storytelling, performance and identity. Amal is a socially engaged artist who works with various groups and communities to instigate and engage in discussion, experimentation and play. Both are working with the artist association Ptarmigan ry, which is a mobile curatorial project based platform.”